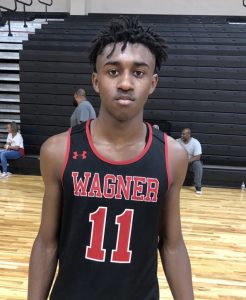 Jerrell Colbert, C/PF – Cornerstone – SPECIAL!! Really Long, athletic player who can hurt you in a variety of ways. Covers a lot of ground on both ends. Strong Summer lead to looks on USA Basketball Circuit.

JaSean Jackson, CG – Wagner – Showing strong signs as a lead guard. Can knock down the 3 and improving mid range game off the bounce.

Gavino Ramos, CG – Antonian – Winner! Makes winning plays on both ends. Smart, crafty with the ball to get to his spots and scores it or finds open guys.

Xavier Martinez 6’0 – Churchill –  Savvy guard who gets to his spots, can score or it or deliver it. High IQ.

Jackson Reid, Wing – New Braunfels – solid wing who can score. Can put it on the floor or spot up from deep. Coming off a strong spring and summer. Good size guard rebounds the ball from the wing as well.

Jordan Barjas, Wing – McCollum – Pretty good athlete. The wing is coming into his own. Can score it inside and out.

Isaiah Washington, PG – Cornerstone Regional – Guard who can really shoot it from all over the floor.

Gavin Walker, PG – St. Mary’s Hall – Cerebral player who is improving getting to his spots. Strong off the dribble.

Hunter Darling, Wing – Boerne Champion – solid wing who can score it at all levels.

Josh Alcocer, PF/C – O Connor –  Had a solid fall season. Shows good hands and footwork to be a force inside.

Tysen Rogers, Wing – Marshall – Athletic wing type who gets to the rim and will finish.

Joseph Taylor, PG – Johnson – Solid guard who has the ability to score in a variety of ways.

Calvin Nance, PG – Brackenridge – Explosive guard who can beat you off the dribble. Will be key for his teams success.

Gavin Gibson, Wing – Brandeis – Improving combo guard who has long arms. Ability to get to the rim or hit open shots.

Stephen Mahler, Wing – John Jay – Long wing with a good stroke from deep. Ability to get to the rim as well.

Will Harris, Wing – Clark – Skilled wing who can shoot it and is coming into his own.