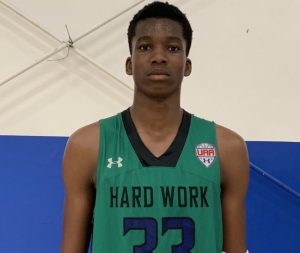 Tre White, Wing – Cornerstone – WOW!! Very explosive guard, Good size, can hurt you by scoring at all levels. Elite ability to get to his spots off the bounce. Committed to Kansas.

Vince Iwuchukwu, C/PF – Cole – Really coming on strong; Athletic, Long, Good footwork, ability to score inside and out. Finishes at the rim High motor, rebounds and blocks a lot of shots.

Austin Nunez, PG – Cornerstone – Ultra quick guard with a quick release. Shoots it clean from 3. Ability to play on and off the ball makes him a constant threat. Can beat you in a variety of ways. Can create for himself and others.

Xavier Martinez, PG – Churchill – Savvy guard who gets to his spots, can score or it or deliver it. High IQ.

Kendall Dow, PG – Johnson – Can score it at all levels. Smooth stroke, also sees the floor and makes the right reads. Puts a lot of pressure on defenders.

Kevin Garcia, SF – Laredo Martin – Puts pressure on the defense with his size and ability to score inside and also step out from 3.

Trey Blackmore, CG – Cole – Good size Combo guard who has the ability to score it. Good size allows him to get shot off in traffic. Sees the floor, has a good feel.

Xavier Kirk, Guard – Warren –  Glue guy who is improving. Strong, athletic, can score it. Real good defender who will give opponents problems.

Aaron San Miguel, Guard – Jefferson – Long guard who can score it. Will be depended on for teams success.

Jordan Mason, PG – Clark – PG who has the ability to get to his spots and score or find open guys. Solid IQ.

Kendrick DeLuna, C/PF – Cornerstone – Very intriguing big kid who can move around and give defenders problems with skill set. Can score it multiple ways. Really long

Matthew Soto, PG – Somerset – Plays the game with a lot of poise, Good IQ, Can really shoot it. Good court vision, gets to his spots.

Malik Pressley, Wing – San Marcos – Intriguing long wing will play a big factor for his team. Can score it at multiple levels.

Jaylen Gardner, PG – Cornerstone Regional – Deceptively long arms, get his hands on a lot of balls. Good athlete who can finish in traffic. Real good in transition.

Johnathan Vega, PG – San Marcos – Good athlete who plays with a high motor, lock down defender ability. Can score it as well.

Jalen Crocker, Forward – Warren – Intriguing Big kid will be one to watch . Lefty is strong in the lane, will finish in traffic and rebound as well.

Robert Jackson, Wing – Brackenridge – Long wing who can score it some. Can put it on the floor and create for himself.