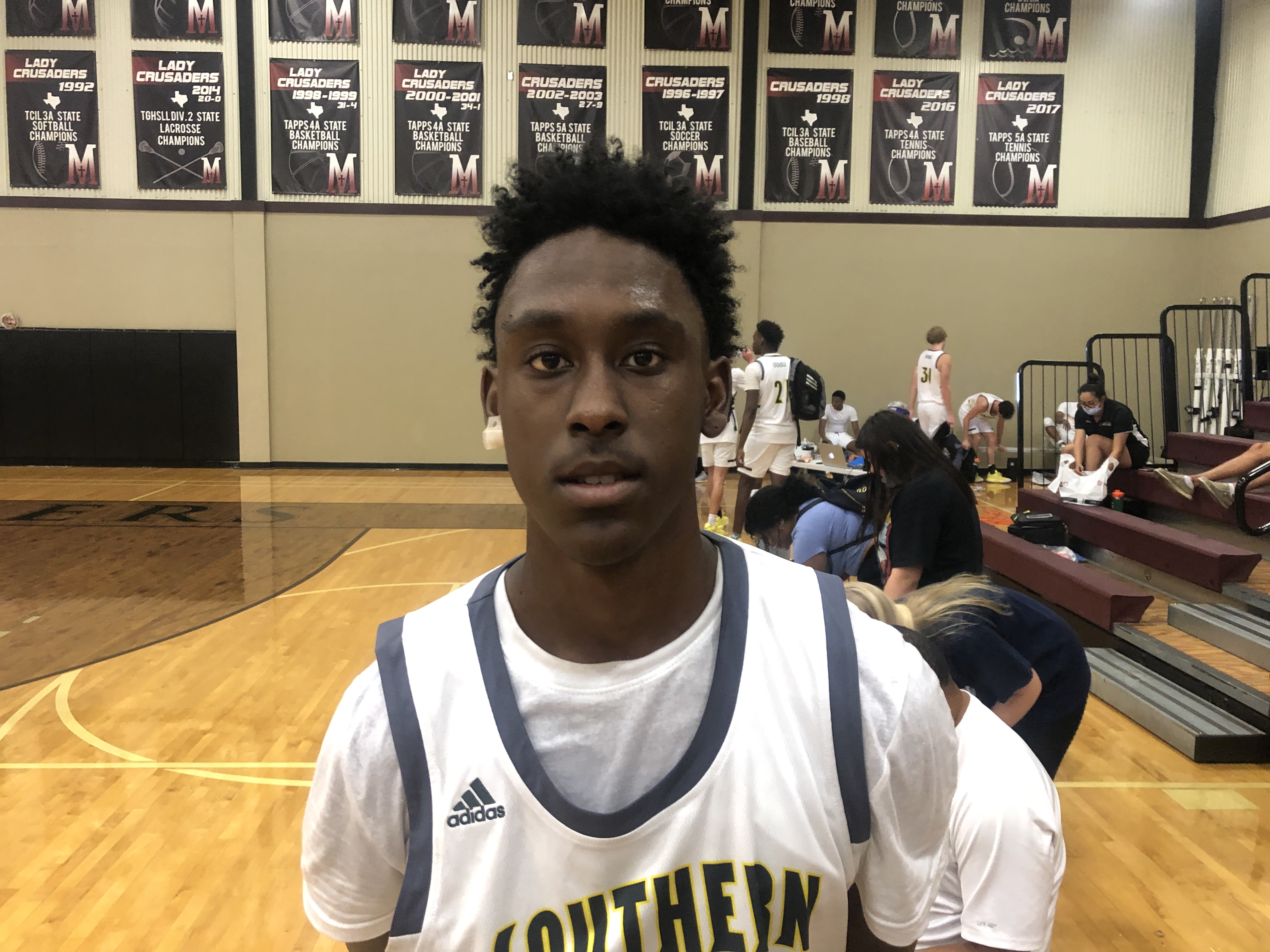 The inaugural ASAK Classic presented by Craig Carlton of Urban ASAK contained a very competitive brand of basketball with 1st-3rd place donation prizes at stake. A lot of talented players in this one as the TBB staff traveled to Austin to catch a slew of prospects that are in our database. Let’s begin with our recruitment 7 from this weekend.

Analysis: Came out the gates each game aggressive. More-so than previous viewings. Was launching it from deep, getting to the teeth of the defense, and showcased a nice floater game. His aggressiveness came with a reward as he found a home at the charity stripe vs Houston Defenders going 11-16. Albeit being a scorer, Gavino knows how to move the basketball and get others involved on the offensive end. Advancing it up the court & moving off the ball to give teammate space to operate off the bounce. Defensively, he was aggressively playing the passing lanes and the stats definitely showed in Next Level Raiders’ matchup vs Southern Assault were he collected 5stls.

Recruitment Notes: Holds an offer from UIW, St. Edwards, and Our Lady of The Lakes. St. Edwards has a strong chance of acquiring his talents.

Analysis: Was very solid in Austin. CJ scored within the flow of the offense and did a sound job getting others involved. His high shooting percentage is attributed to his ability to get to the basket, brush off contact, and finish through contact. A ‘bully’ guard, stylistically, CJ punishes smaller defenders utilizing his size and strength. His rebounding numbers should be taken a look at too, averaging 5rebs a game as a guard is a strong number. Securing rebounds with two hands in traffic, Noland has no problem getting there amongst the trees and battling for a rebound.

Recruitment Notes: A plethora of schools have offered CJ and stay in contact with him. He will condense his list today. Kansas State & Oklahoma seem to be making the hardest push for him. Has had multiple zoom meetings with each school. If I had to forecast this, I would say he commits to the Sooners. Still, no exact timetable on an announcement but would plan for a fall announcement from Noland.

Analysis: Does 8pts 4rebs a game pop out to you? Probably not but it was Lake’s first game back in a month so there was some leniency in the evaluation. Once his legs got back under him, we got to see why he is labeled one of the best 2-guards in the 2021 class.

“When I was out for a while, it took some time for me to get my legs back under me and get used to playing a fullcourt game. I’m getting back to normal,” Lake said.

Against Texas Hardwork on Saturday, he produced a 13pt 3reb 2asts outing on 83% shooting. Jalen has added to his offensive repertoire, not being just a spot-up shooter but someone that can attack closeouts and generate a clean look when operating off the bounce.

Recruitment Notes: Colorado State has been recruiting him the hardest. Been on Zoom meeting with them essentially every week. Tulsa has also been recruiting him hard. Took a virtual tour with Tulsa a couple of weeks ago. Has a scheduled zoom meeting coming up with VCU & Oklahoma State (Who have also offered).  Plans to cut the list down in the next few weeks and make an announcement in the fall.

Analysis: Again, are those averages sexy? Nope, but Nicholas made an impact in the games that went beyond the stats. A switchable defender that’s capable of guarding three positions and Damon moves consistently off the ball which generates scoring opportunities for himself and teammates. Let’s take a look at Damon’s game vs Next Level Raiders where he strung together 16pts 3rebs & 3asts on 64% shooting. He showed ability to hit shots off the dribble, move, and spotting up due to his pre-shot footwork and smooth shooting mechanics. Defensively was very steady and even held his own when switching on post defenders and battling inside.

Sam Houston State recently have offered Damon and last week a zoom meeting was conducted with the whole staff.

“They feel I can be someone that contributes in many ways. Shooting, passing, defending, rebounding. Just be an overall player for them,” Nicholas said.

SMU, UNT & Oral Roberts have offered Nicholas as well and he told us that Arizona State has shown strong interest and heard from them every week. Plan for a decision to be made during the middle of the scholastic season.

Analysis: Very solid numbers for Mr. Jones as he utilized his length and athleticism to make plays inside. Ball-skills have definitely improved as he’s able to attack straight line with either hand to get to the basket.

“I’ve really put focus on my offensive game. Getting quicker so I can get past the defender and also putting a lot of shots up so I can extend my range,” Jones said.

Still, at times he was careless with it which led to turnovers. Jones is an athletic forward that brought versatility on both ends and his strong intangibles to go along with a high ceiling of being a more offensively efficient threat keeps us intrigued. Below is a link to a video of Jones collecting an offensive rebound & finish with a putback to secure the win for Hardwork.

Recruitment Notes: TCU, LSU, Houston, Tulsa & McNeese State have offered. Houston has been pursuing him the hardest out of the bunch so far. Expect more to check-in, in the next couple of months.

Analysis: One of those players that holds strong intangibles. Defensively is a pest by being able to get in personal space of the ball-handler and making them work bringing it up the floor. He dives for loose balls, will go get a key rebound late in games. At the end of the day your getting a winner with Gibson. Shot it well in spot-up situations from deep and has made improvements as a decision-maker off drives. Not getting too deep in and getting stuck as much as he would get in the past.

Recruitment Notes: Holds an offer from Central Arkansas and he hears from them every week. Sam Houston State & UTSA have shown interest and Mason has been receiving strong interest from Wofford & South Dakota State.

Wofford: “I get a text or call from (Head) Coach (Jay) McAuley or (Assistant) Coach (Dwight) Perry every week. They love my game and just want to see me in person.

South Dakota State: (Assistant) Coach (Tramel) Barnes and I talk a lot. He watches a lot of my film and just wants to see me in person.

Analysis: The lefty guard is one of the top point guards in the 2021 class. Explosive athlete that has a strong handle and is equipped with good vision. His jumper from deep still needs a little cleaning up but I believe it will be manufactured and polished in due time. Jimel thrives getting downhill and generating attention from the defense in which he will make the right play. One college coaches should take tabs of.

Has heard from New Mexico and schools have been calling the staff about him. His mix of positional size, athleticism, and ability to create space off the bounce is a reason we are high on his game. Expect his phone to be ringing with much consistency as the season rolls.