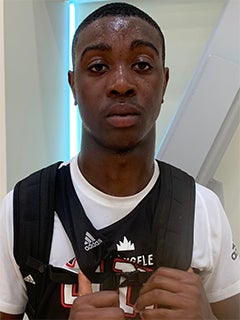 The 2022 Class in Texas adds another highly-touted prospect in guard Tajavis Miller from Anaheim, CA.

“I’ve played about six games so far and the basketball has been a physical, defensive brand of basketball,” Miller said. “Excited to get to league play and in the playoffs where I can play some of the best the state has to offer.”

Tajavis gave a self evaluation of his game as he talks about what he brings to the table.

“Offensively I do a good job getting to the basket, can shoot it from three and i rebound well for a guard,” Miller said. “I bring a lot to the table on both ends of the court because I can really defend too.”

On to the recruiting, Miller holds offers from Washington State, Loyola, Pepperdine, San Diego as USC, LSU, Colorado State, LMU, Cal-Berkely and several others have shown interest. He talks about what the schools visualize him in their program.

“All of the schools look at me as a versatile guard that can defend & play multiple spots and score the basketball.”

In watching a few games on film. Miller sports a big wingspan of at-least plus 4 length, while standing at 6’3. He contains a tight handle, has range that extends to the three point line, while utilizing his length as a finisher, able to get shots off over the extended reach of the interior defender. I’m very intrigued by his upside as a defender. Mobile laterally and with outlier wingspan for a guard, he’s capable of becoming a plus switchable defender now & once he goes to college. Will get the chance to watch him live soon, but has all the tools of being a higher-end D1 player.

The athletic genes run strong in Miller’s family. His mom, Brittney was an All American softball player at the University of Iowa, played professionally & currently holds an assistant softball coach role at Texas Tech. His dad Lathavis Miller played football at Iowa Wesleyan and played Arena League Football also. His granddad was 7ft tall and was a basketball player at Albany State in Georgia.

Tajavis told TBB he will play this spring & summer with Texas Impact 4:13. He talked to us about his relationship with 17U HC & Program Founder, TJ Thomas & their relationship.

“Coach TJ reached out to dad early and once I started building a relationship with him, I knew where I wanted to play my last summer. Our Relationship is growing & he is hard on me. He wants to see me succeed so I felt it was a no brainer.”