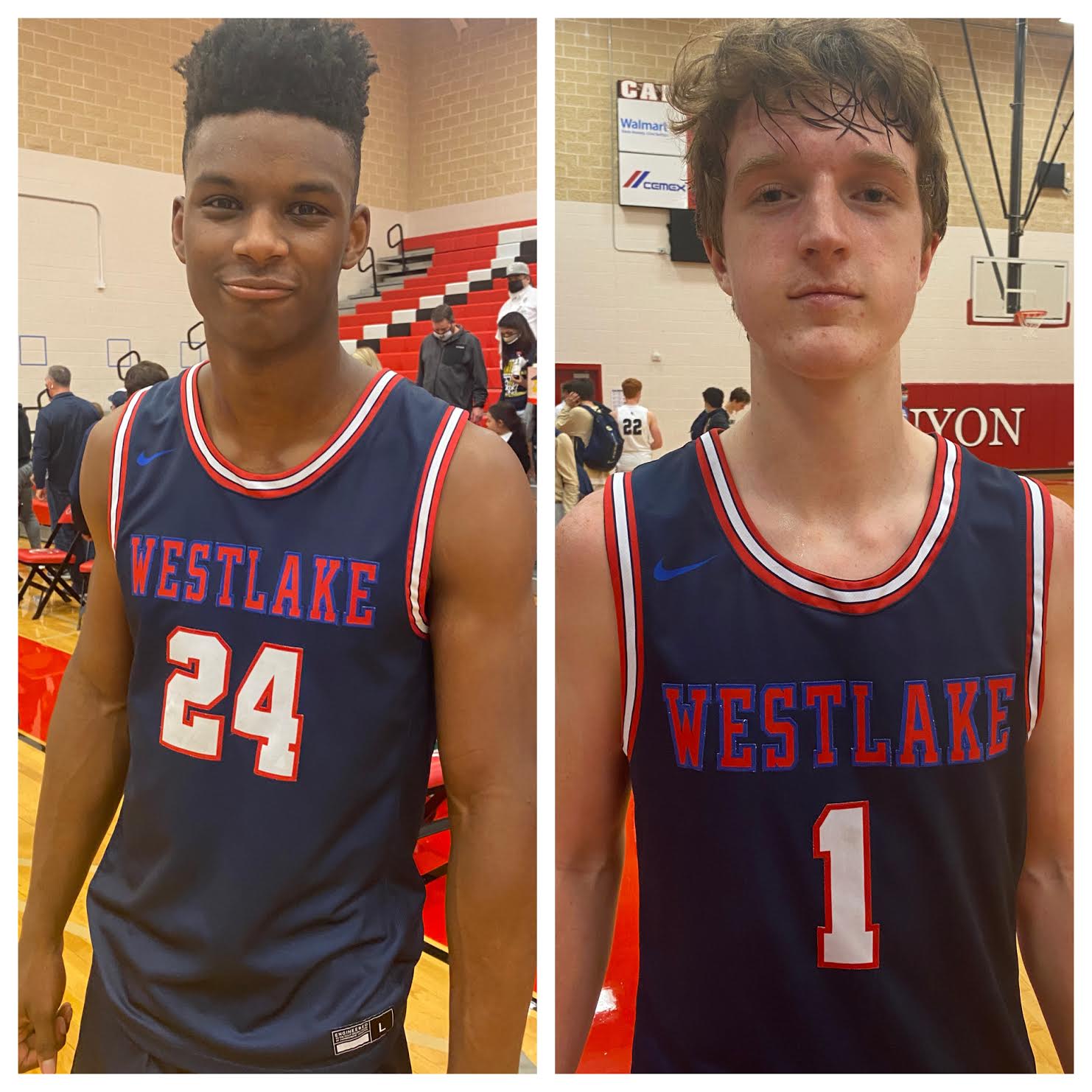 REGION 4-6a Semifinal…Round 4. 2 District champions. A spot in the Region finals on the line always makes it a very tough round where you typically get the stronger teams match up in the bracket. In this one you Region 4-6A favorite Austin Westlake (#5 in the State) coming in off of a tough win Saturday over # 18 SA Johnson. They have a solid senior class with some quality playoff experience under their belt. They have Kansas signee KJ Adams, but there are more solid contributors. They were up against a solid SA O Connor group. They come in ranked (#16in the state) and they also feature a couple of seniors in 6’5 Adam Benhayoune and point guard Isaac Orosco who can both make plays in a variety of ways so it had the makings of a strong matchup with several college prospects on the floor.

In the beginning it was all about Adam Benhayoune. A versatile skill set; kind of a poor man’s Kevin Love who started out on fire connecting on his 1st 3 deep balls of the game. He was on such a roll early on that he had 14 of O Connor’s 18 points. Showing his ability to stretch the floor but also occasionally make plays inside. On the opposite end KJ Adams (Kansas) came out attacking and also hitting a 3 to keep defenders honest. The Chaps kept pounding away and kept it close despite O Connor’s early surge. Benhayoune had 11in the 1st qtr while Adams for Westlake  led the way with 8.

In the 2nd qtr both Adams and Benhayoune continued to play well but a couple of teammates joined the show. ‘ 21 Cade Mankle caught fire and hit a couple deep ones as Westlake started to get comfortable. Things heated up even more as ’21 pg Isaac Orosco got in on the action showing his ability to create for others, but also knock down shots from several spots. His court awareness and IQ controlled the flow for most of the game. He and Adam teamed up in a lot of 2 man situations and he made the right plays. Both teams tightened up a bit defensively to end the half and O Connor still held a 2pt lead

Both teams came out with a strong on both ends in the 3rd qtr. But it wasn’t the ones mentioned previously. For Westlake this time it came from Sr pg Eain Mowat. In a roll of setting up others most of the night he saw an opportunity and knocked down a couple of deep 3s himself. For O Connor their punch came from ’23 prospect Jalon Munoz who hit a couple deep ones himself to include getting fouled on one. His 2nd half contributions were huge (12pts) to help O Connor on pace for the upset.

In the 4th O Connor came out with intentions on delivering the knock out blow. They built a lead as much as 10 with their ability to stretch the D and hit the 3 ball. This time it was ’22 Evan Whaling, He hit consecutive 3’s that had Westlake on the ropes . That’s when Westlake turned up the defensive intensity a bit led by Srs Mowat who had 3 steals during the run and Adams. To start the run ’21 Mankle(15pts) hit a HUGE 3 just in front of Westlake’s bench from about 23-24 ft. This sparked them and Adams got back in attack mode, sensing plays needed to be made with only 4 minutes remaining  and doing what he typically does affecting the game with his ability to get down hill and finish through contact. He was relentless on the glass as well during the critical stretch. He also made good reads finding ’22 Nehikhare Igiehon on a couple of possessions as he showcased his ability to finish inside. Adams (12 in the 4thqtr and 28 pts for the game) took matters into his own hands. Causing or being involved in several turnovers and he got out in transition and finished. Mankle hit yet another to extend their lead and O Connor could not gain any more momentum as Westlake scored 22 in the 4th to overcome their deficit to win.  Austin Westlake 62 SA O Connor 57